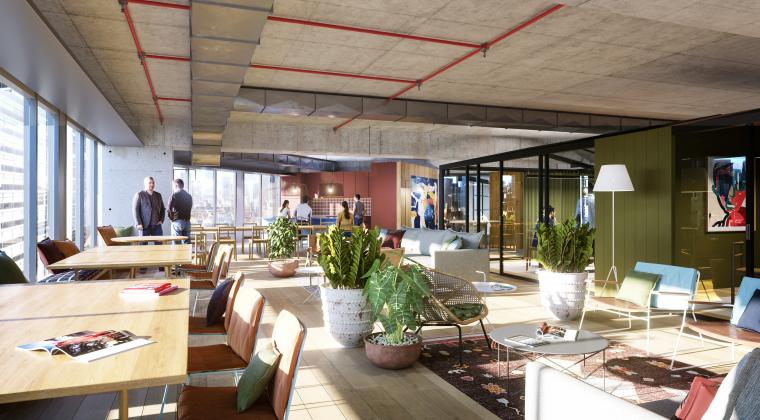 Created by one of the world’s leading designers of co-working spaces, the architectural firm BVN, the space occupies more than 1,000 square metres on Level 10 at 580 George Street and can accommodate 160 members.

GPT’s National Director, Flexible Workspace Solutions Shey Hooper said: “Our new Space&Co. venue has been specifically designed to deliver to the growing interest we are seeing from businesses of all sizes for flexible workspaces that offer more privacy and digital security.”

“We continue to see strong demand for our premium flexible workspaces, including 580 George Street where we have now increased the size of our Space&Co. a second time since we opened in the building in 2016.”

“The launch of our new Sydney venue follows the successful expansion of Space&Co. in Melbourne – where we now have four venues with around half of our members drawn from the existing tenants in the buildings where we operate.”

BVN Senior Practice Director Sally Campbell said the design of the new venue had been shaped by the evolving needs of members to Space&Co.’s existing locations.

“We are now able to collect data from existing sites which provides a deeper understanding of the challenges Space&Co. customers face in their own businesses and how that impacts their space requirements,” said Ms Campbell.

“Space&Co. are a provider of real estate solutions that support evolving businesses, and for this reason it is a necessity to incorporate flexibility in both environment and service to be able to respond quickly to tenants ever changing needs. Adopting an attitude of constant evolution is critical,” she said.

In addition to 580 George Street, BVN has designed the Space&Co. venues at Melbourne Central Tower and 2 Southbank Boulevard in Melbourne, which was recently shortlisted in the Workplace Design category for the upcoming Australian Interior Design Awards.

The new venue replaces the 700 square metre Space&Co. on Level 2 at 580 George Street, which itself had already been expanded from 400 square metres since its opening in 2016.

Ms Hooper said the said the venue had benefitted from being in Sydney CBD’s thriving Midtown area, which has emerged as a hub for start-ups and international technology and creative firms.

“580 George Street includes the best amenities and is arguably the most convenient location for any workplace in Sydney,” said Ms Hooper of the building which has direct access to Town Hall Station and the planned Sydney Light Rail.

Ms Hooper said the recent $25 million refurbishment to 580 George, which includes its award-winning podium and lobby, had helped drive the strong interest in the Space&Co. venue.

Guests at the 580 George Street Space&Co. will have access to the building’s End of Trip facilities which include bicycle storage, showers, lockers and a complimentary towel service.