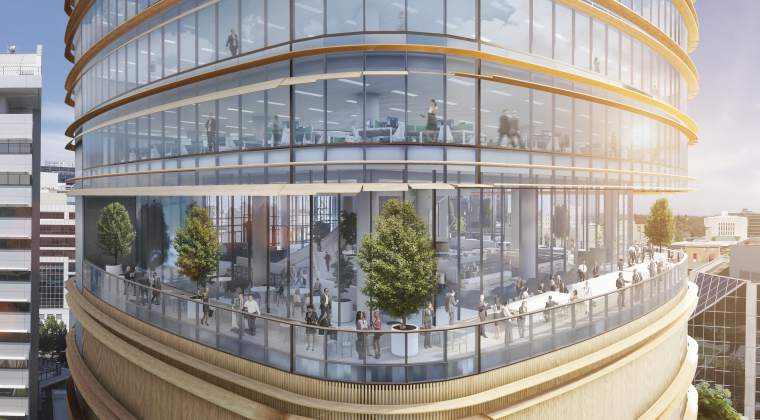 The GPT Group announced today that it has gained development consent from the City of Parramatta Council to construct a 26,000 square metre office tower at 32 Smith Street Parramatta.

GPT’s Head of Office and Logistics Matthew Faddy said: “This project will create a major iconic landmark and add energy to the transformation of Parramatta into a world-class commercial and cultural centre.”

“There has been a strong level of enquiry from blue-chip occupiers and we believe that today’s announcement will create even further momentum,” he said.

Principal at Fender Katsalidis, Mark Curzon said: “This is a fantastic moment. Having won the design competition and obtaining Development Approval, 32 Smith Street now becomes a reality. It represents an important change in the commercial market, realising Parramatta’s aspirations to be a true alternative to the Sydney CBD.”

The design of 32 Smith Street includes widened footpaths, glass lift shafts and facades, which will improve the visual and pedestrian connection to the nearby Parramatta River and surrounding streets. The car park will be located above ground on Levels 3 to 5, to maximise the ground level activation of the building.

The development is a short walk to the Parramatta Transport Interchange and planned $1.2 billion Riverbank cultural precinct which will house the new Museum of Applied Arts and Science.

Discussions are well underway with a number of prospective pre-commitment tenants via exclusive leasing agents JLL.

Mr Faddy said the significant infrastructure investment and strong population growth in Western Sydney and improved amenity in the local area had fuelled the strong demand for office space in Parramatta.

“All of these factors will reinforce the Parramatta CBD as the geographic heart of commercial activity in Sydney and make it an even more compelling location for major corporate tenants,” said Mr Faddy.

The Property Council of Australia’s most recent Office Market Report showed Parramatta continued to be one of the country’s best performing office markets.

Construction on 32 Smith Street is planned to commence this year with works due for completion in mid-2020.