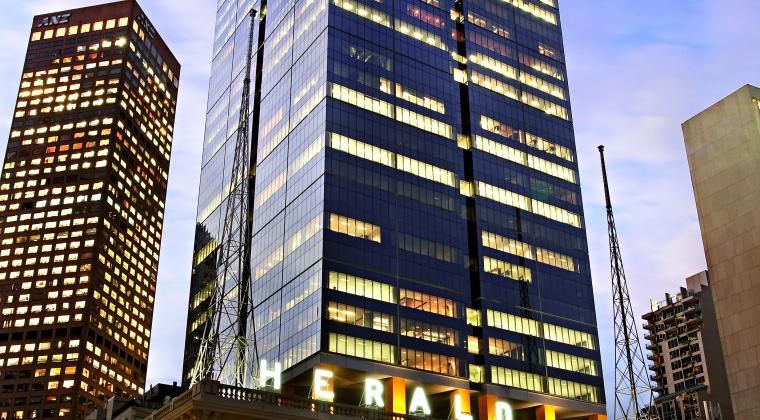 If you’re reading this in an office, then take a look above you at the light fixture.

Most people don’t do this, but perhaps they should. After all, if it’s a fluorescent – and the odds are that it is – then it contains mercury, a highly toxic heavy metal. When dumped in landfill, the mercury reacts with bacteria, producing methylmercury – which dissolves in water and ends up in plants and animals.

If that sounds bad, it gets worse. Fluorescent tubes also use more electricity than LED lights – making them worse for the environment and more expensive to run.

As such, you could call it a light bulb moment when the GPT Wholesale Office Fund (GWOF) decided to only use LED lights in its buildings as part of its target to achieve net zero carbon emissions by the end of 2020.

“We changed over 2000 lights in all the common areas, bathrooms and plant rooms,” says Neil Chalmers, Operations Manager at 8 Exhibition Street, which is co-owned by GWOF and Keppel REIT.

Chalmers says this took two and a half weeks – with most of the work happening out of office hours.

So how much power is saved by using LEDs?

“We expect the installation of LED lights across our portfolio alone will reduce energy costs by around $600,000 a year and cut carbon emissions by 4,000 tonnes a year,” says Martin Ritchie, GWOF Fund Manager.

“The $185,000 cost of installing the LED lights has reduced 8 Exhibition Street’s energy and maintenance costs by around $7,800 a month, which translates to a return on investment of around 50 per cent,” Ritchie says.

As Steve Ford, GPT’s Head of Sustainability and Energy, points out, there’s more to energy savings than meets the eye.

“LED electricity savings can work in two ways,” he explains.

“Principally it saves on electricity consumption amounts but also LED upgrades lower the baseline demand levels for buildings. This in turn reduces strains on the grid and peak demand charges for a building.”

Furthermore, Chalmers says that fluorescents use more energy than their wattage would indicate.

“The old fluorescents had an iron core transformer, which actually uses a chunk of power – so that’s another thing that’s saving money for us, as our power factor correction has improved,” he says.

“Energy companies now charge for the power factor. So your light might use only 40 watts – but if the light fitting uses effectively 56, they're effectively charging you for 56 watts.”

LED lights, however, don’t have this problem.

“The LED upgrades are yet another example of being good for the environment and good for business,” Ford says.

“The LED upgrades save energy and cut our emissions whilst providing annual returns of 20% to 50% on project investment costs.”

Although GPT’s goal is to become more environmentally friendly, another key benefit of LED lights is the lower maintenance factor.

“We're not going around replacing lamps every week as they fail," Chalmers says.

“These LEDs are going to last for 10 years plus. So there's less inconvenience for the tenants since we won’t be coming in anywhere near as much to replace tubes, and that's one of the big factors as well,” he says. “Yes, we're saving money on power, but also on the handyman running around changing lamps and tubes.”

Ford adds that this means a safer environment for the maintenance teams, as there’s less time spent on ladders.

To boost the savings, 8 Exhibition Street has also installed sensor controls to automatically turn lights off when the offices are empty.

Although LED lights can produce a warm glow, they actually produce dramatically less heat than other alternatives. In fact, compact fluorescents are so inefficient that they release about 80% of their energy as heat.

Chalmers says that although most tenants don’t usually think much about lighting, they did all notice the change in the common areas.

“For the first couple of days some of the tenants went, ‘Geez, it’s bright in here’ – in a good way. It used to be dark and dreary, and now we have that LED natural light which is sharp.”

It turns out that LED lighting is closer to natural sunlight than any other lighting alternative – which has even led some to claim that it’s healthier.

For example, research from LightingEurope (prepared by A.T. Kearney and the German Electrical and Electronic Manufacturers’ Association) found that LED lights could lead to improved concentration and energy.

On top of that, some compact fluorescents emit radio frequency radiation that can cause fatigue, dizziness, ringing in the ears, eyestrain and even migraines – making LEDs seem even more attractive.

As proud as GPT is of what it’s done so far, there’s still far more to come.

At 8 Exhibition Street, for example, Ernst and Young – its flagship tenant – is looking at changing the large neon sign on the side of the building to LED.

Furthermore, every time a tenant moves out, the existing lights will be taken out and replaced with LEDs for the next occupant – which means tenants will pay less outgoing operational charges. (GPT also encourages existing tenants to discuss with their building’s management team about changing their existing lights to LED.)

Then you have GWOF’s other 17 office buildings in Sydney, Melbourne and Brisbane – all of which will also have their lights replaced.

On top of that, GWOF plans to trial battery technology to reduce energy costs and dependence on the grid during peak demand periods.

“We recognise the property sector accounts for a significant proportion of global greenhouse gas emissions and as result we want the GWOF portfolio to be carbon neutral by the end of 2020,” Richie says.

“This is a challenging task but we are committed to taking a leadership role in reducing carbon emissions.”