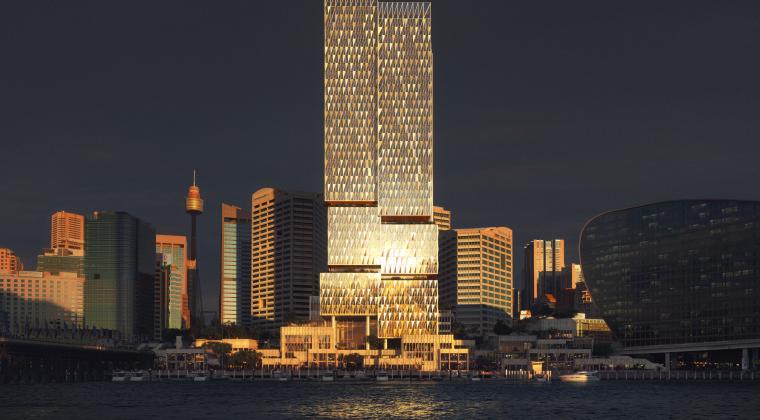 An urban park centred scheme, designed by Henning Larsen, has been selected as the winning concept for The GPT Group and AMP Capital’s planned 73,000 square metre Cockle Bay Park redevelopment.

The jury-selected design will feature a new retail podium with a commercial office tower above, reconnecting Australia’s largest city to Cockle Bay and the Pyrmont Bridge with an employment, leisure and cultural precinct, while providing the only sizeable area of public green space along the Darling Harbour waterfront. The project will revitalise the Cockle Bay precinct, creating a community destination that offers a seamless harbourfront connection spanning from Barangaroo Reserve to the International Convention Centre.

GPT’s Head of Office and Logistics Matthew Faddy said the redevelopment will set a new benchmark for office building design in the Sydney CBD. “The quality of the entries produced for this competition were exceptional. Cockle Bay Park will deliver cutting-edge workplaces, leading sustainable design (6 Star Green Star), and a significant new public place for the community along with a world-class retail, entertainment and dining precinct,” said Mr Faddy.

Planning and Public Spaces Minister Rob Stokes said: “This area will be a great example of how we can deliver new tower developments that also have a great benefit to the public, with almost a hectare of new public space to connect the city to its harbour,” Mr Stokes said.

AMP Capital Managing Director Office & Logistics, Luke Briscoe said: “By partnering with landmark architecture firms and incorporating leading-edge urban design, we are optimising performance for our investors, as well as delivering a huge win for our customer and the people of Sydney. We are delighted the design brings to life our aim to reconnect the harbour and the city by creating a new expanse of public open green space.”

The transformed precinct will include an expansive elevated park over the eight-lane Western Distributor, which has separated workers and visitors to the waterfront from the city since the 1970s. The space above the freeway will be converted in to more than 7000 square metres of public and green space, realising the original vision for the site by re-stitching Cockle Bay to Sydney CBD.

Current constraints in the form of raised freeways and lowered roads will make way for landscaped open space, ramped access and public lifts. The resulting improved pedestrian access will reconnect workers and visitors to the commercial core of Sydney, with enhanced entrances on Market and Druitt Streets providing unencumbered access to Town Hall Station and the new Sydney Light Rail.

Partner at Henning Larsen Viggo Haremst said: “We are incredibly proud to have won this important design competition in the heart of Sydney. Cockle Bay Park links the city to the waterfront at Darling Harbour, and we are excited by the opportunity to design a destination that is distinctly human-scaled while also offering world-class retail, office, and public space. Sydney is unique in how it entwines a friendly local atmosphere within a cosmopolitan city – we see Cockle Bay Park as an opportunity to reflect this and to emphasise the best of what Sydney can be.”

The design provides a unique opportunity to deliver strategic employment and workplace uses in the tower, interlocked with engaging cultural uses arranged within its retail podium.

The podium will deliver 10,000 square metres of retail space, with a wide pedestrian boulevard serving as the link between internationally acclaimed shops, restaurants, bars, and the park facilities and lobby above.

The development will greatly enhance Darling Harbour’s capacity to host large public events such as New Year’s Eve, Vivid and Lunar New Year, with the series of terraces forming a natural amphitheatre able to accommodate up to 20,000 people for large scale public events.