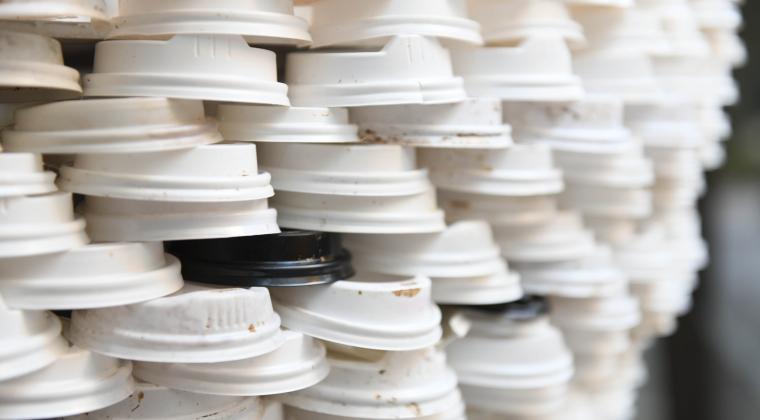 It took a national television program to highlight the enormous amount of waste associated with the daily habit of millions of Australians, when it took to Melbourne’s streets in a tram filled with 50,000 used takeaway coffee cups. Or the same amount of unrecyclable coffee cups that go into landfill across country each 30 minutes, which tallies up to around one billion a year.

The War of Waste program aired the same time GPT was trying to find ways to solve one persistent problem across its office buildings and shopping centres – the contamination of its recycling bins with non-recyclable takeaway cups.

GPT, which has the goal of diverting 98 per cent of tenant waste away from landfill, faced the problem of nearly half the takeaway coffee cups entering its buildings being disposed of in its recycling bins. This resulted in some paper and plastic recycling streams being diverted to landfill.

Part of this problem stemmed from the common misconception that standard takeaway coffee cups can be recycled – despite their being recovery facilities in Australia for cups which are generally made of fibres, plastic and wax. It is only plastic coffee cup lids that can be recycled.

Many people think they are doing the right thing. But that it far from the case given the paper coffee cups contain other materials that make them unrecyclable

GPT in 2016 chose Sydney’s MLC Centre, which it co-owns with Dexus, as the first location to combat this problem.

After an initial campaign to educate occupants of the building on how takeaway cups should not be tossed into recycle bins (and preferably not used at all), the MLC management team with the support of GPT promoted the use of reusable takeaway cups. In early 2017, occupants in the building were offered complimentary reusable takeaway KeepCups and coffee outlets at MLC offered rolling discounts for reusable cups in order to raise awareness and reduce waste.

The MLC team launched an awareness campaign to promote the use of reusable cups in mid-2017, where occupants were encouraged to “lift the lid” or to “take their top off” their single use coffee cups. Kitchens and tea rooms throughout the building had a dedicated plastic coffee top bin were lids were donated towards the creation of an artwork commissioned by the MLC team.

Unveiled in the MLC lobby in September 2017, the giant sculpture (made up entirely of coffee cup lids) “Disposable Truths” by Marina DeBris sought to raise awareness of the need to reduce waste. The artwork also provided a talking point for occupants and visitors to the MLC Centre about the large amount of waste generated by disposable takeaway cups.

More than 850 or one quarter of the occupants in the building supported the initiative by ordering their own customised KeepCups through the MLC website. In all, the number of reusable coffee cups used by MLC occupants has increased fivefold since the start of the campaign.

Disposable coffee cups now make up less than half a percent of contamination in mixed (commingled) recycling bins (less than 5 per cent of total contamination) leaving MLC Centre.

GPT's Head of Sustainability & Energy Steve Ford said: "We wanted to bypass attempts to recycle single use cups because we have seen that this simply doesn’t work. There are too many different cups and waste processes that don’t align."

"Whereas quality reusable cups only require the coffee lover and barista to change a few habits. Our goal was to give everyone the opportunity to enjoy their coffee from a premium coffee cup which makes the coffee experience better too."

GPT has now rolled out similar programs across its assets to reduce the use of takeaway cups.

The Group's CBW (Corner of Bourke & William) office complex in Melbourne this week will launch a campaign to promote the use of reusable cups in time for the launch of the second season of the ABC's War of Waste program.