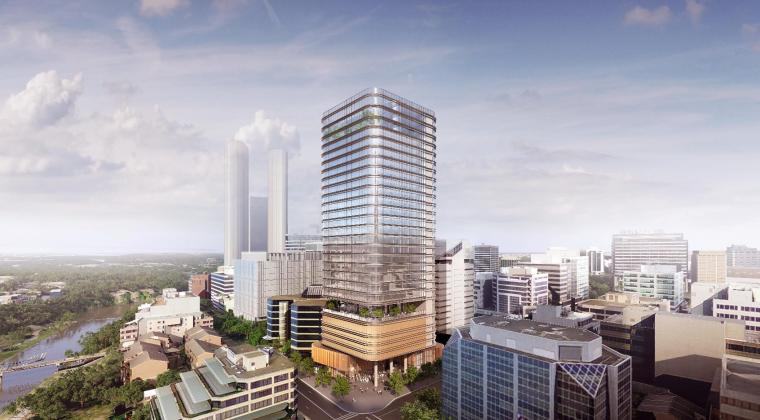 The GPT Group is excited to announce that it has secured QBE as the major tenant at 32 Smith Street, Parramatta.

QBE will occupy 51 per cent of the 26,400sqm prime grade office building for an initial term of 10 years, with the deal including signage rights.

The development is GPT’s first in the burgeoning Parramatta office market, and, in conjunction with the Group’s recent acquisition of Eclipse Tower at 60 Station Street, further bolsters its exposure to the Parramatta CBD, which has one of the lowest vacancy rates for A-grade office space in Australia.

GPT Head of Office & Logistics, Matthew Faddy, said 32 Smith Street will add to the ongoing transformation of Parramatta. “We are very pleased to provide QBE with contemporary, state-of-the art premises for their Western Sydney offices, and fulfil their needs for a premium quality workplace in an excellent location in the Central City of the Sydney region,” said Mr Faddy.

“The GPT Group development at 32 Smith Street will be an exciting addition to the Parramatta office market and combines with our recent A-grade commercial acquisition of the Eclipse at 60 Station Street. We continue to see growth in commercial activity and significant infrastructure investment in the area, and we expect demand for office space will continue to grow. With strong population growth and improved local amenity, it will further reinforce Parramatta’s status as a major commercial centre.”

QBE Australia and New Zealand Chief Operating Officer, Renée Roberts, said the movie is a significant one for QBE, creating a new Western Sydney hub for the insurer.  “32 Smith street will incorporate improved technology and modern workspace design that will encourage greater collaboration and efficiencies between teams.” She said.

GPT has appointed Richard Crookes Constructions as the building partner for the project, with construction works now underway. Completion of the project is scheduled for late 2020, with an expected end value of over $300 million.