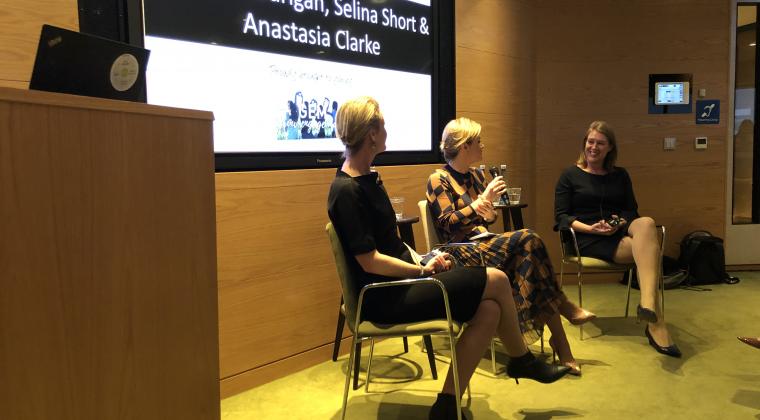 GPT today hosted a discussion with three leading female property industry executives on how the industry had progressed in advancing pay equity and becoming more diverse and inclusive.

“I feel that it’s incredibly hard to come up with the right strategies. Leaders need to make a long-term commitment to diversity and inclusion and we need to be incredibly disciplined in the way we go about that,” Carmel Hourigan told the session facilitated by GPT’s GEM (Grow Engage Master) initiative, which seeks to build an inclusive workforce and advance the careers of women in property.

Ms Hourigan, who is a special adviser to the Property Male Champions of Change, said inclusion remained the biggest challenge in fostering diversity and increasing the number of women in senior roles in the industry.

“This needs to be a front of mind, active approach to leadership,” she said.

GPT’s Anastasia Clarke said the property sector needed to look outside the box in ensuring it was focused on fostering the best talent and confront some of its traditional gender biases.

“What is obvious in this industry is that there are a lot of males, and a lot of senior males particularly, that are not necessarily blocking females but maybe are tending to choose their own type,” said Ms Clarke.

Ms Clarke said one bias that still needed to be challenged in some quarters was that “women get looked at as though they are perhaps a specialist in their field or a support unit person rather than a ‘property’ person, despite often spending their whole career in the industry".

Selina Short, in discussing the Grow the Talent Pool report she co-authored with the Property Council of Australia, discussed some of her insights into the causes of the gender pay gap.

Ms Short explained the pay gap continued to resurface in some companies even after they had sought to fix it, for two key reasons. “One is recruitment and the way we recruit,” she said, noting that companies were inheriting pay gaps by hiring people from other organisations.

“The second reason why that pay gap comes back is out of cycle pay increases,” said Ms Short, noting that these pay increases mainly went to males. She explained that this resulted from a higher proportion of women choosing to remain in their jobs and not attract job offers from other companies.

“Females if they are sharing or are the lead carer in a family situation, we know that they are incredibly loyal,” she said, noting how they chose the flexibility in their current roles over a higher paid job in another company.

The report was commissioned to support the Property Male Champions of Change, which includes leading CEOs from across the industry as its members including GPT’s Bob Johnston who use their individual and collective leadership to increase gender equality in the property sector.

“The reason why we wanted to do this research and focus on property was to take away the excuses,” Ms Short told yesterday’s panel discussion.

The latest Grow the Talent Pool report found the property sector had made some progress since 2016 in promoting diversity and advancing attitudes to flexible working arrangements and pay equity. The report found the percentage of males in the sector who thought pay equity was an issue increased from 26 per cent to 33 per cent between 2016 and 2018. It also found that 79 per cent of men and 70 per cent of women in the property industry thought the sector had become more diverse and inclusive.

However, the report found there was still a general view that the ‘boys’ club mentality’ continued to prevail in some quarters of the industry, with 61 per cent of women and 34 per cent of men still believing it discouraged people from pursuing careers in property.