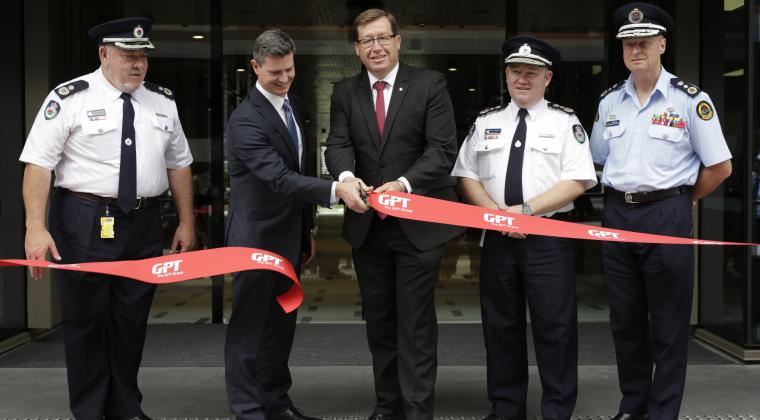 The GPT Group last week celebrated the official opening of its office building at 4 Murray Rose Avenue, Sydney Olympic Park, hosting a morning tea and media tour of the building in which the NSW Rural Fire Service (RFS) are now headquartered.

Mr Nelson said the building marked another important milestone in the GPT's ongoing commitment to the Sydney Olympic Park precinct. “These assets, and the other GPT assets here, are flagship locations for the organisations they are home to, and this site is no different.” he said.

“We’ve long regarded this area as having great potential to be one of Sydney’s most appealing office locations. It’s strategically located between two of Sydney’s busiest business districts, is easily accessible with key road and transport links, and there are world-class sporting and leisure facilities spread throughout the precinct.”

The 15,700sqm state of the art facility was purpose built for the Rural Fire Service, and Minister Grant said the new $21.5 million headquarters would bolster modern firefighting operations, with the inclusion of capabilities such as live fire response information, intelligence sharing, digital mapping, as well as public information and media broadcasting resources.

Commissioner Shane Fitzsimmons agreed, stating, “We’ve been able to take the lessons learned out of operating in the former location and integrate them in to this new, cutting edge facility.”

The Rural Fire Service will be joined by more tenants in the coming weeks, with heads of agreement now signed for over 80% of the building. Construction of the RFS headquarters began in April last year, and concluded this month. The facility includes 180 screens, 640km of data cables and 5,200 data access points.

Among other features, the building has achieved a 5 Green Star, NABERS energy and water rating, combined with high quality end-of-trip facilities.  Properties GPT has delivered at Sydney Olympic Park include the Quad Business Park, 3 Murray Rose for Samsung’s Australian headquarters and the award winning 5 Murray Rose for the food and beverage company Lion.