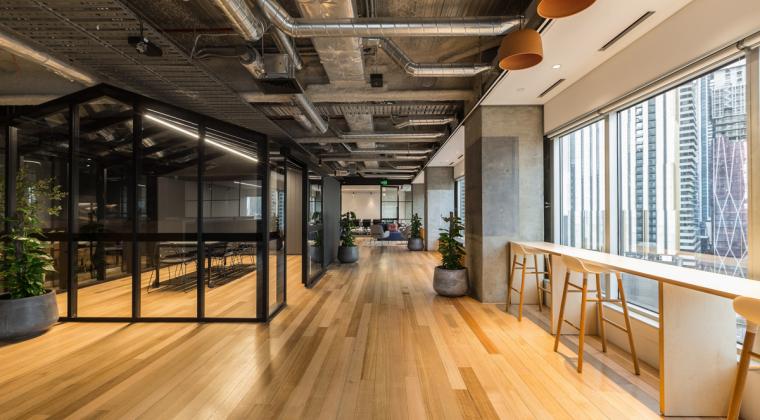 The GPT Group’s flexible workplace business Space&Co. today announced its plans to open a new location at 8 Exhibition Street and expand its venue at 530 Collins Street due to strong ongoing demand.

The 1,568 square metre Space&Co. at 8 Exhibition Street, due to open in the first half of 2018, will occupy the entire Level 22 of the building on the Eastern side of Melbourne’s CBD and will be able to accommodate up to 200 new members.

The new venue will include a cafe, co-working spaces, private workspaces and semi-private rooms and will be designed by the same firm behind the Space&Co. at 530 Collins Street, WMK Architecture.

Space&Co. today also announced it will expand its 530 Collins Street venue for a second time since it opened in early 2016, to accommodate an additional 40 members.

GPT’s Head of Office & Logistics Matthew Faddy said Space&Co. was delighted to have secured a floor at 8 Exhibition Street, which is one of Melbourne’s landmark premium office buildings and has panoramic views of the Dandenong Ranges and Port Phillip Bay.

“Aside from having some of Melbourne’s best views, our new Space&Co. will have the best amenities for any co-working facility on the Eastern side of Melbourne’s CBD, with members able to access the building’s new End of Trip facilities and onsite café,” said Mr Faddy.

The announcement of the latest expansion comes three months after Space&Co. expanded its Melbourne Central Tower venue by 1,425 square metres or a full floor, complimenting the existing 660 square metre space it has in the building. Space&Co. also plans to complete an expansion of its venue at 580 George Street Sydney in early 2018.

“We continue to see strong demand for our flexible work and co-working spaces, not only from independent professionals and small businesses but also from larger organisations looking for flexible workspaces on a temporary basis,” said Mr Faddy.