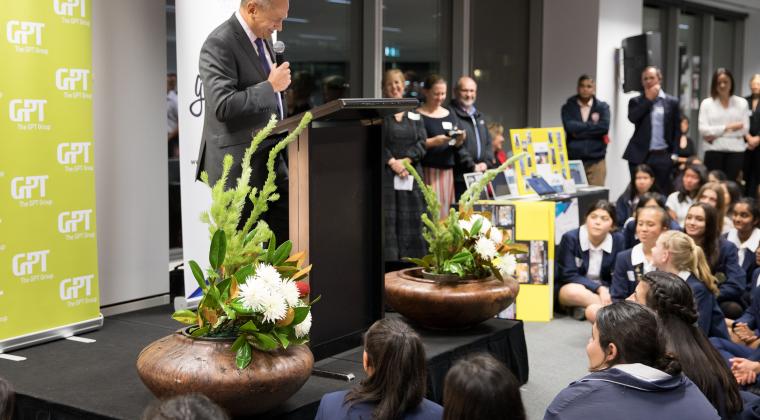 Girls in Property wrapped up its second year at an awards night hosted by the GPT Group last week, where 14 entries from seven Sydney schools were presented to a panel of industry experts and their school communities.

The projects were based on real-world challenges they would face as property industry professionals and capped the second Girls in Property Week, where more than 180 female Year 10 students participated in a range workshops, site tours and sessions to gain a taste of what it is like to work in the property industry.

GPT CEO Bob Johnston told the girls, parents and carers at the awards night of the opportunities he had been given in his three decades in the property industry, from the time he started working for Lendlease as a university graduate in the 1980s to his career which had taken him across the US, Asia and Europe.

“For me the property industry provided a terrific way for me to establish my career and have many many different opportunities,” he said at the function held at the GPT Wholesale Office Fund-owned Darling Park 3 Tower in Sydney.

Mr Johnston noted the increasing difficulty school students and their parents had today in finding a career given the impact of automation and technology. But he said property had a good track record in responding to change.

“While we will face a great deal of change I’m really confident property will remain a major part of the Australian economy, continue to be innovative and thrive in this changing environment,” he said, before the entry from Riverside Girls High won the Awards night.

The students were taken on tours of some leading property assets including Scentre Group’s Westfield Sydney, the Western Sydney University’s recently opened campus at One Parramatta Square and Lendlease’s Barangaroo.

An initiative of the Property Council’s NSW Diversity Committee and the NSW Department of Education, Girls in Property seeks to highlight the many careers open to women in the property industry and help high-school students make informed choices to set themselves up for the a career in property.

The program also seeks to attract more females in into areas of the property industry that continue to be dominated by men and build a pipeline of future female leaders.

The Property Council has already noted the program has started to have a positive impact with the four schools who participated in the first year of the program reporting significantly more students selecting HSC subjects suited to a career in property.

Following the success of Girls in Property in NSW, the program will be expanded nationally this year, with one-day programs planned for a series of Year 10 students from schools in Victoria,  Queensland, South Australia, Western Australia and the ACT.