GPT continues commitment to reconciliation with launch of Stretch RAP 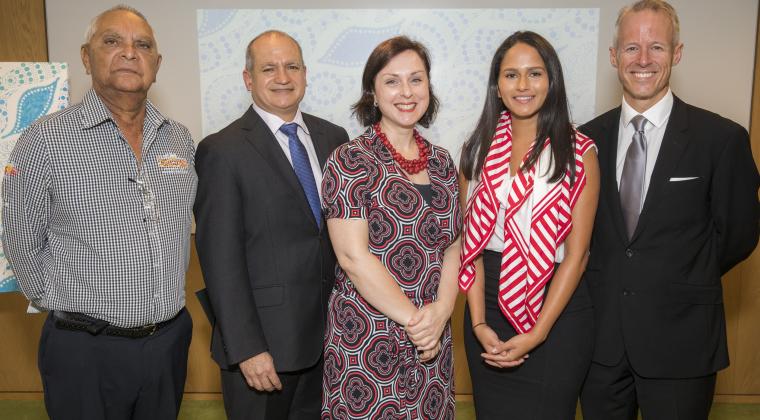 The GPT Group this week launched its second Reconciliation Action Plan (RAP), continuing its commitment to supporting the social and economic prosperity of First Nations peoples and the broader Australian community.

“GPT launched its inaugural RAP in late 2015 and I’m very pleased that we are reaffirming our commitment through the Group’s Stretch Reconciliation Action Plan,” said GPT Chief Executive Bob Johnston.

Mr Johnston said GPT’s inaugural RAP helped build a deeper understanding across the business of why reconciliation was important to Australia and First Nations people.

“It is only when you have a deeper understanding of the history, culture and experiences of our First Nations people that you truly understand the importance of reconciliation,” Mr Johnston told the launch event of the Stretch RAP, which was opened by a Welcome to Country from Gadigal Elder Uncle Ray Davison.

“While GPT is not a large employer of people, we do have assets that touch a lot of people and communities. Our retail assets in particular are very much integrated into the community and provide us with a real opportunity to help build stronger understanding, respect and relationships with First Nations people and the communities in which we operate,” he said.

“The path to reconciliation, and in particular equity and equality, is extremely complex and I expect it will take a significant amount of time to achieve this. However, the property industry has extensive reach and I’m hopeful that raising awareness of the challenges faced by our First Nations people will create a bigger groundswell across the industry that will result in positive and impactful outcomes,” said Mr Johnston.

Since the launch of its inaugural RAP in October 2015, more than 250 employees have taken part in face-to-face cultural training with many more participating in events such as National Reconciliation Week and NAIDOC Week.

The Chair of the NSW Reconciliation Council Cecilia Anthony told the event that “education and employment are those twin pillars that can really change things for people”.

“While the numbers of Aboriginal and Torres Strait Islander employees at GPT are small, I think the really important thing for you all to remember is that their impact is going to be so much more than GPT probably ever thought that they could set up,” said Ms Anthony.

“The impact of these young people … not just on this company and this particular part of the corporate sector but on their families, their younger siblings and their younger cousins and family members and their broader community will be immeasurable.”

“We are seeing a real tipping point in Australia, where we for the first time are seeing an emerging Aboriginal and Torres Strait Islander middle class. We’re seeing leaders in the corporate sector, and young people going through university and entering parts of the employment sector [where] the doors were never open to them before.”

At the Stretch RAP launch, GPT Business Development Executive and former CareerTrackers intern Rhiannon Warrie said: “With GPT I am especially proud of how far we have come as a Group.”

“But with our Stretch RAP I really think we are pushing ourselves, we’re really looking to raise the bar and take things to the next level. I’m really excited.”