It was a program that resulted from the National Australia Bank’s decision to renew the lease of its Docklands headquarters in Melbourne.

The clauses required GPT to use its “best endeavours” to increase its Base Building Energy NABERS rating from 4 to 5 Stars by the end of 2015 and NABERS Water rating from 2.5 to 3 Stars.

Given NAB and GPT each have it as a key business imperative to cut their energy costs and carbon emissions, both companies were keen to improve the environmental performance of the building.

Included in the lease was a clause for GPT and NAB to establish a Building Environmental Management Plan and Committee to explore how the building, which opened as Dockland’s first commercial office building in 2003, could lower its energy and water use. The plan included funding for capital works – including $650,000 from GPT and $300,000 from NAB towards upgrading the lighting in the building.

After the new lease was signed, GPT and NAB wasted no time in forming a committee in developing a plan on reducing the building’s water and energy use. No stone was left unturned by the six member committee, which included members from GPT operations team, NAB’s environmental team and the facilities management company Cushman & Wakefield.

Every aspect of the building’s heating, ventilation, air-conditioning and lighting was reviewed in an effort to improve its efficiency.

The centrepiece of the program was the most ambitious office light-fitting replacement project ever undertaken in Australia.

The one-month project saw 3896 light fittings (across 14 levels) in the building replaced with energy efficient LED light bulbs, resulting in an energy saving of 62 per cent. With a five times longer lifetime than the original lights, the LED lights also reduced waste and maintenance costs.

The program’s other projects included:

• Modifications to the building’s car park exhaust fans, which saw an energy saving of around 50,000kWh a year, around the same amount of electricity used by ten average Australian homes.

• A building schedule review that saw all plant items individually adjusted to minimise overruns and more control over the base building’s plant operation – resulting in a saving of 60,000kWh a year.

• A lowering of the set point of the building’s boilers from 88°C to 66°C and “outside air temperature” lock-out with no impact on the building’s internal temperature – resulting in an electricity saving of 2650kWh a year and gas saving of 1.5 million megajoules a year.

• The building’s 23 air handling units that supplied air static pressure had their set points lowered, resulting in a reduced fan energy and a saving of 78,000 kWh a year.

• Variable speed drives installed in the building’s three main condenser water pumps (used to circulate water for cooling) to cut energy use, and more efficient controls for 800-808 Bourke’s cooling towers. This saved 20,000 kWh of electricity a year and 1.5 million litres of water.

In 2014, further improvements were made by installing more efficient lighting in the building’s fire stairwells, car park and loading dock, saving more than 250,000 kWh a year in electricity.

Further efficiency gains were made through a building energy optimisation program.

“In my view the introduction of green clauses in the lease renewal, combined with achieving our sustainability targets are good examples of true partnerships and inherent sustainability,” says GPT general manager Dominique Impiombato. 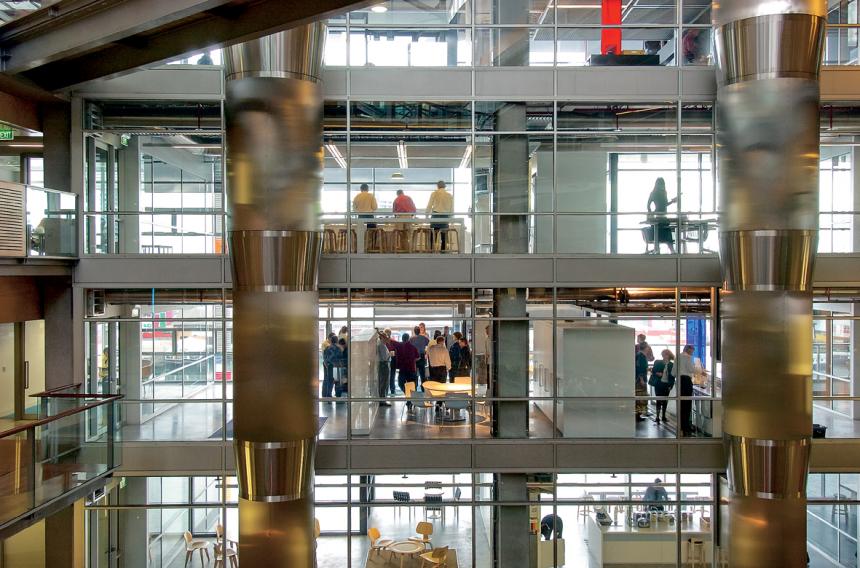 800-808 Bourke Street achieved a 5 Star NABERS Energy rating in late 2013, two years ahead of the target date and achieved a 3 Star base building NABERS Water rating within a year. Within the first year, the project had already saved $230,000 in annual energy costs, with a further $55,000 of annual energy savings found in 2014.

The LED light replacement alone saved NAB $90,000 a year in energy costs and GPT $2500 a year in lower cooling tower requirements in summer.
800-808 Bourke Street in 2014 also became the first office building to be awarded a Green Star performance rating by the Green Building Council of Australia.

“Given the building was designed before the Green Star design rating tools were developed, we were thrilled to have the opportunity to partner with GPT to assess the operational performance of the building through the Green Star Performance pilot,” says NAB’s Head of Environmental Sustainability Nicola Murphy.

The building is testament that buildings built before the era of energy and water ratings (NABERS was commercialised a year after 800-800 Bourke St opened) can still achieve excellent results in sustainability.

800-808 Bourke Street featured in the ABC’s The Business program this week as an example of the lead taken by the corporate sector in reducing carbon emissions.