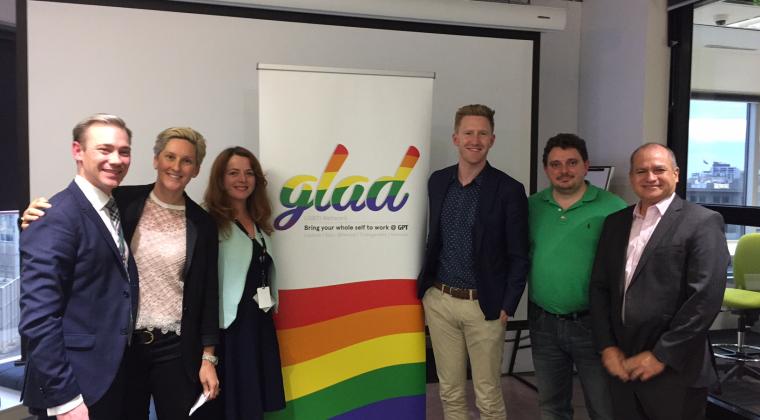 GPT has welcomed the expansion of its support network for Lesbian, Gay, Bisexual, Transgender and Intersex staff members to include straight “Allies” who openly advocate and support greater LGBTI inclusion in the workplace.

At an event attended by GPT CEO Bob Johnston, GPT Head of Retail Vanessa Orth and the pioneering LGBTI advocate and AFL player Jason Ball in Melbourne last week, the GPT LGBTI Awareness & Diversity Network (GLAD) launched its Ally network that would allow all of GPT’s employees to participate in promoting LGBTI inclusion.

In the three months since the launch of GLAD, GPT Regional General Manager and GLAD Lead Antony Keenan said the network had received many enquiries from employees at GPT who wanted to get involved and become open supporters for the network.

“Allies can be a tremendous support to other employees who may have family and/or friends that identify as LGBTI people, who may not want to come on board as an ally but may want to talk to someone who understands and will lend a supportive ear,” said GPT Regional General Manager and GLAD Lead Antony Keenan at last week’s launch.

“GPT recognises that Allies play a really important role for the LGBTI community as they allow for a more diverse voice for LGBTI inclusion,” said Mr Keenan.

GPT staff members who are Allies can be approached by LGBTI employees who want to discuss their experiences in the workplace. While not counsellors or caseworkers, Allies can listen, provide guidance and be a supportive point of contact for their LGBTI work colleagues at GPT. To help support Allies and provide education, GPT has created an online training program that new Allies complete when they join the network.

The key aims of the GLAD Ally network are to:
• Provide a visible network of identified Allies to people of diverse sexualities and gender identities to be agents of change.
• Create a safe, nurturing, inclusive, and affirming working environment
• Build a support and advocacy network through education
• Develop further awareness and visibility of staff and managers of diverse sexualities and gender identities and their issues

Being visible is seen as one of the important aspects of the role of the 30-odd GLAD Allies across GPT who have signed up and completed the training already which include CEO Bob Johnston.

Apart from being listed on the GPT intranet, Allies are given many opportunities to openly show their support from attending key GLAD-sponsored events to using the GLAD logo on their internal staff profiles.