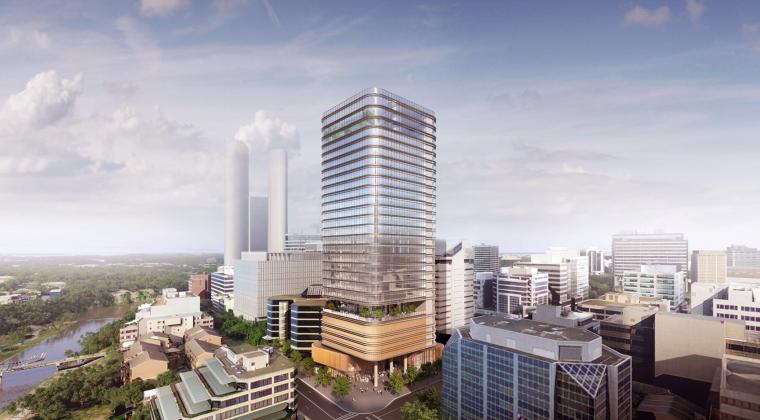 A design that draws its inspiration from the nearby Parramatta River has been selected for GPT Group’s planned 26,000 square metre office tower at 32 Smith Street Parramatta.

GPT’s Head of Office and Logistics Matthew Faddy said the Fender Katsalidis design will set a new benchmark for office buildings in Parramatta.

“32 Smith Street will be one of Parramatta’s standout landmarks and will support the City of Parramatta’s vision to transform the CBD into a world-class commercial and cultural centre,” said Mr Faddy.

“The quality and detail associated with each of the four entries for the competition was exceptional and GPT would have been proud to deliver any of these designs.”

Principal at Fender Katsalidis Mark Curzon said: “We are incredibly proud to have won this important design competition. This amazing project will redefine office design in Parramatta, setting a new benchmark for workplace design, sustainability and public benefit, in a beautiful way.”

The Fender Katsalidis design will open the ground plane of the building through the construction of two round pebble-like podiums set back from the street. The footpaths around the building will be widened to improve pedestrian access and the surrounding laneways will be activated with retail and bicycle facilities.

The 32 Smith Street car park will be located above ground on Levels 3 to 5 to maximise the ground level activation of the building. The design will include glass lift shafts and glass facades to improve the visual connection from the building to the river and surrounding streets.

Director of Fender Katsalidis Rob Mirams said: “We have been working in Parramatta for some time and it is great news that GPT has the foresight to commit to a project of design excellence for this important site.”

Construction on 32 Smith Street is planned to commence by mid-2018 with project completion in 2020.