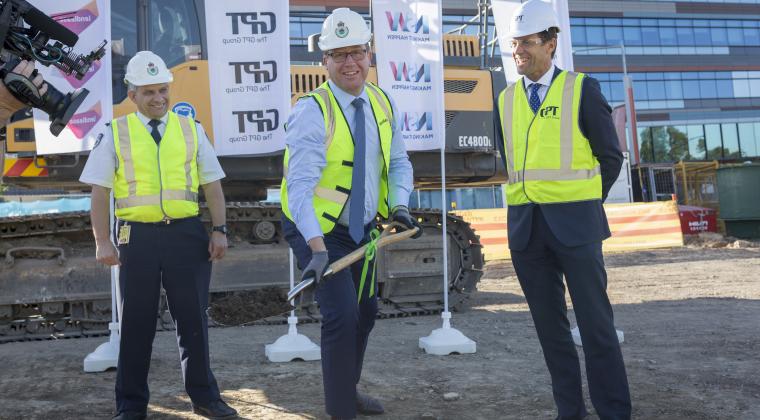 The GPT Group last week celebrated the start of construction of its 15,700 square metre office development at 4 Murray Rose Avenue, Sydney Olympic Park, which will house the new headquarters for the NSW Rural Fire Service (RFS) from late 2018.

The five storey campus office building is the third site to be developed by GPT in Sydney Olympic Park’s Parkview Precinct and will have an end value of more than $100 million.

Mr Faddy said he was delighted work was now underway on 4 Murray Rose, which will be designed to the NSW RFS’s specifications. The building will include a state-of-the-art Operations Centre from where the RFS will coordinate all of its fire operations across NSW.

“The development at 4 Murray Rose marks another milestone in the evolution of Sydney Olympic Park as a world-class office precinct. It also continues the key role GPT has played in developing Sydney Olympic Park into one of Sydney’s premier commercial and employment hubs,” said Mr Faddy.

“With a high quality tenant in the RFS, 4 Murray Rose will add another high quality building to the GPT Office and Logistics portfolio.”

“The NSW RFS is a recognised leader in the emergency management and firefighting sector, and this new building will ensure it continues to have access to the best facilities, particularly during major emergency operations,” said the Emergency Services Minister Troy Grant.

“The new building is ideally situated to provide access to other agencies and the infrastructure and technology that is now a critical part of modern firefighting,” said the Minister.

4 Murray Rose will have large span floor plates and is designed to achieve a 5 Star Green NABERS energy and water rating. Other tenant amenities will include end of trip facilities, bike storage and parking for 240 vehicles.

At Sydney Olympic Park, GPT also owns the Quad 1 and Quad 4 office buildings and the Town Centre which is a consolidated holding of five neighbouring assets that have the potential to become a mixed-use development site.