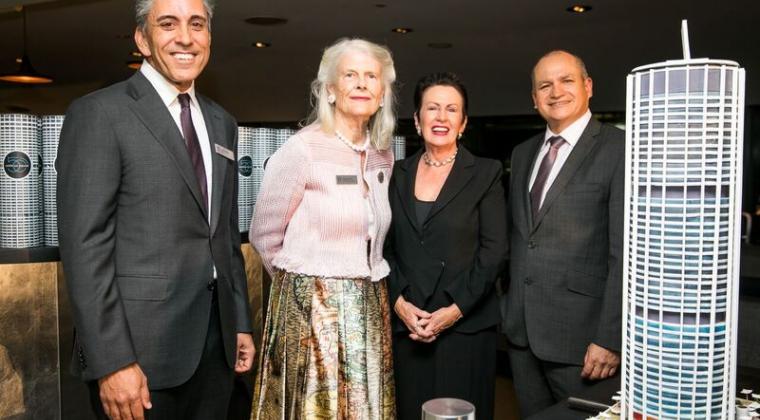 Australia Square this week celebrated its 50th anniversary at an event attended by the building’s owners GPT and Dexus, the Lord Mayor of Sydney Clover Moore, architect Penelope Seidler and many of the people who worked on the development of the building during the 1960s.

“The building which remains one of the most recognisable pieces of architecture in Sydney, was revolutionary in a number of ways when it first opened in 1967,” said GPT Group’s Chief Executive Bob Johnston.

“As Sydney’s tallest office building and the world’s tallest lightweight concrete building at the time it was constructed, Australia Square broke new ground for its design, construction, engineering and its public art.”

The event, hosted by comedian and “design nerd” Tim Ross, was also attended by the NSW Planning Minister Anthony Roberts, Property Council of Australia Chief Executive Ken Morrison and many of the building’s tenants.

Designed by Australia’s most celebrated architect Harry Seidler, Australia Square broke new ground in being the first office development in Sydney to embrace the use of outdoor space for city workers to enjoy their lunch and socialise. A move that helped trigger the widespread adoption of alfresco dining that is now commonplace across Sydney.

“Australia Square embodies the ethos of the GPT and Lendlease founder Dick Dusseldorp who championed the belief that companies needed to give something back to society and take a longer term view on their investment decisions,” said Mr Johnston.

“The fact that 50 years on, Australia Square remains fully occupied and one of the most popular landmarks and meeting places in Sydney’s CBD, clearly is an endorsement of the long-term vision that went into creating this great building,” he said.

“I remember Harry coming home and saying, ‘My goodness. Dick [Dusseldorp] has got a whole city block and we are going to do something amazing’. He was very excited about it,” said Ms Seidler.

“The vision was there to create a piazza, as in Italian cities where people could enjoy themselves, eating, drinking, conversing on private land which was part of the development.”

Ms Seidler noted how Harry Seidler perfected the structural identity of the design of Australia Square when he went to Rome to work with one of the world’s leading engineers Pier Luigi Nervi.

Australia Square, which is 100 per cent occupied, while maintaining its original Harry Seidler design has undergone numerous upgrades to its building systems and amenities in recent years to ensure it remains one of Sydney’s leading office buildings.