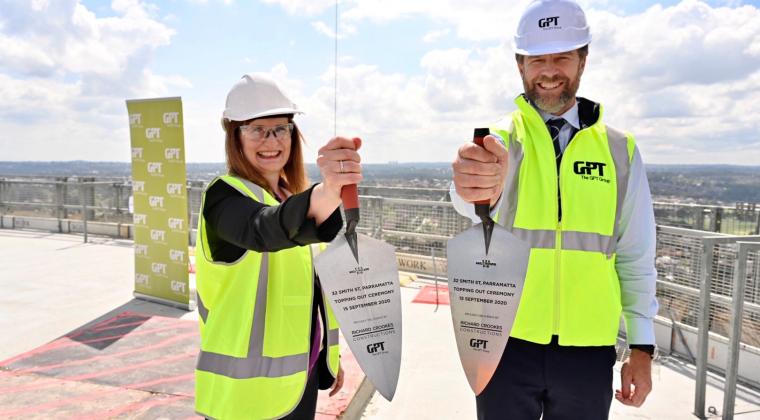 The GPT Group today celebrated a major milestone in the construction of its 26,500 square metre office building at 32 Smith Street, Parramatta, by hosting a topping out ceremony.

The ceremony saw a magnolia tree craned on to the roof of the development after construction reached its highest point on the building, which will house anchor tenant QBE, Coleman Grieg lawyers and Space&Co.

Mr Faddy said the development at 32 Smith Street marked another important step in the evolution of Parramatta into a world-class commercial precinct.

“This A-Grade office building will be one of Parramatta’s standout landmarks and will only bolster the City of Parramatta’s vision to transform the CBD into a world-class commercial and cultural centre,” said Mr Faddy.  “We are delighted QBE and Coleman Greig are committed to occupying this iconic building. 32 Smith Street will deliver state-of-the-art premises which promote cutting-edge technology and a workspace design set to accommodate modern working practices.”

Mr Faddy also paid tribute to the teams involved in the project, and their ability to deliver a monumental project despite the ongoing challenges of COVID-19. “This project is being delivered in exceptionally unusual circumstances.  The COVID-19 pandemic has thrown a curve ball at all of us this year. I would like to thank the Richard Crookes Construction team, the Parramatta City Council, our consultants and the GPT development team for working together to ensure that the 1,500 people who have worked on the 32 Smith project remained safe and this vital project could be delivered on time.”

The 29 storey office building is the first site to be developed by GPT in the Parramatta CBD and will have an end value of more than $320 million. It is complemented by the Group’s other holdings in Parramatta, including 60 Station Street and 87-91 George Street.

Recently acquired by GPT’s Wholesale Office Fund, the George St site has potential to accommodate a 75,000 square metre office tower with a design competition commencing in the coming months.

The design of 32 Smith Street is the forefront of environmental sustainability, targeting a 5 Star NABERS Energy rating to accompany the recently awarded 6 Star Green Star rating, representing world leadership in sustainable design. This is consistent with GPT’s recent announcement to target net zero carbon across our portfolio of managed assets by 2024.

QBE has committed to approximately 51 per cent of the net lettable area of the building for an initial lease term of 10 years, with the deal including signage rights.

The building will include a ground level ‘urban room’ event space, an elevated podium terrace facing the Parramatta River, a tree covered sky deck with panoramic views. Available to tenants will be state-of-the-art End-of-Trip facilities with bike storage and lockers, while the car park will be located above ground on Levels 3 to 5, maximising ground level activation of the building.